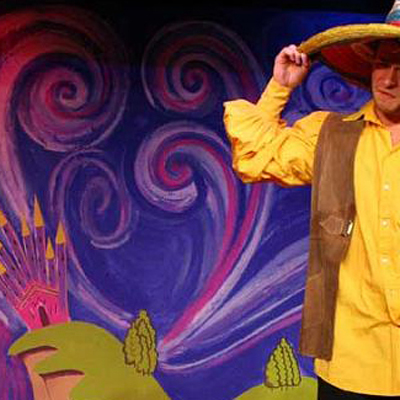 SYNOPSIS:
In this traditional family pantomime, poor Jack and his mother, Dame Effy Caishus, are about to be evicted from their hovel by the wicked Uriah Creep. When Jack takes their beloved cow, Maisie Moo to market, he makes a trade that will change their lives. When the undefeatable giant, Gogmagog, kidnaps Princess Jill, Jack must prove his bravery against the odds to rescue his one true love…

JACK AND THE BEANSTALK is a hilarious, full-length pantomime by the award-winning playwright Alexander Vail, commissioned in 2011. An epic adventure, decorated with suitably silly characters and outrageously funny dialogue, JACK AND THE BEANSTALK is a brilliant show, loved by audiences of all ages. Containing all the classic panto moments, with very modern flourishes, the first production delighted packed houses in its sold-out run.

“Jack and I are so poor, we can’t afford running water. I’ve had to move the rooms around so the holes in the roof are now above the bath, the sink and the kettle. We can’t afford any pets – even the mice have stopped breaking in at night since I’ve started using the crumbs from the cupboards in my couscous surprise..”

JACK AND THE BEANSTALK was first performed at Beckenham Theatre in December 2011.

To request a perusal script for JACK AND THE BEANSTALK by Alexander Vail, please email me.